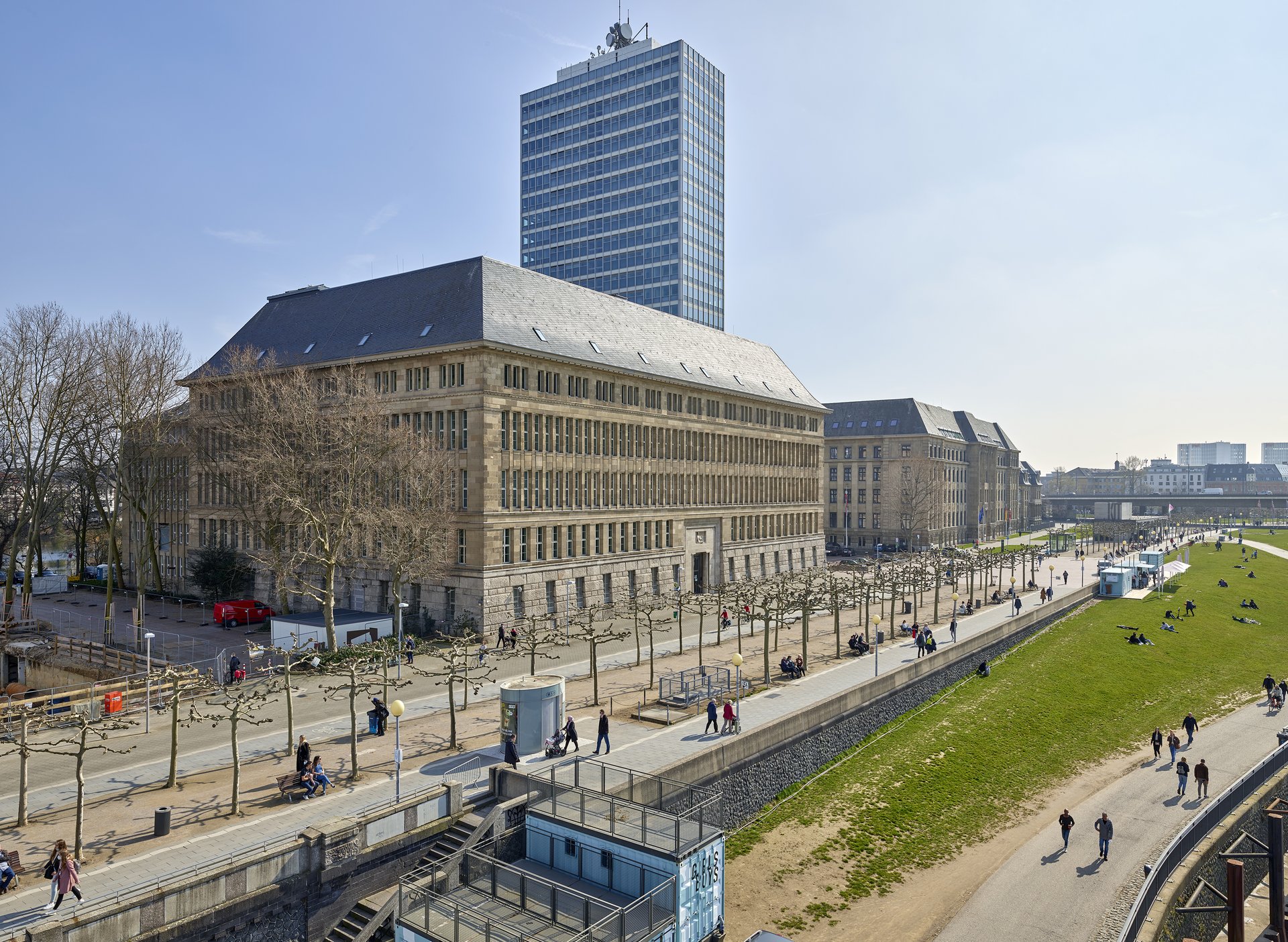 About us
FOUNDATION HOUSE OF HISTORY NORTH RHINE-WESTPHALIA

Establishing a new history museum
With the founding of the House of History North Rhine-Westphalia, a modern museum is dedicated to the contemporary history of Germany’s largest federal state. Set on Düsseldorf’s Rhine embankment and close to the North Rhine-Westphalia state parliament, the museum is housed in the Behrens building. This important historical building, originally designed by Peter Behrens in 1910 to house the Mannesmann factory’s former administration, served as the official residence of the North Rhine-Westphalian Minister Presidents until 1953.

Statutory task
In a legislative act ratified on 18 December 2019, the NRW state parliament entrusted the Foundation House of History North Rhine-Westphalia with the task of vividly conveying and describing the history of the federal state of North Rhine-Westphalia, its establishment and development.

The House of History North Rhine-Westphalia is to present the history of Germany’s most populous federal state in an exciting, informative way appealing to a wide audience. Inspired by the core principle of “Democracy, Diversity, Change”, it invites visitors to actively engage with North Rhine-Westphalia’s past, present and future.
Furthermore, the Foundation’s mandate includes the task of establishing a museum collection. Concretely, the Foundation takes into its collection those artefacts and objects which illustrate North Rhine-Westphalia’s historical events and developments, stories and history. In this way, we can play our part in expanding and consolidating the cultural memory of our federal state.

Organisation
The Foundation House of History North Rhine-Westphalia is an independent state foundation under public law. The Foundation has four organs – the Board of Trustees, the Presiding Committee, the Accademic Advisory Board and the Working Party of Civil Society Groups.

Accademic Advisory Board
The Accademic Advisory Board comprises up to 15 experts appointed by the Board of Trustees for a period of five years. The Council members include historians, political scientists and museum specialists, and they advise the Board of Trustees as well as the President’s Office. The Council chairperson is Prof. Dr. Karl-Rudolf Korte, Professor of Political Science, University of Duisburg-Essen, and Director of the NRW School of Governance. The deputy chairpersons are Dr. Constanze Itzel, Director, House of European History, Brussels, and Dr. Frank Bischoff, President of the State Archives of North Rhine-Westphalia, Chairperson Gesellschaft für Rheinische Geschichtskunde, Duisburg.

Working Party of Civil Society Groups
The Working Party of Civil Society Groups comprises up to 15 representatives of civil society groups. They are appointed by the Board of Trustees for a period of five years. The Working Party advises the Board of Trustees and the President’s Office, and supplements the professional expertise of the Academic Advisory Council. Until January 2022, the Council was chaired by Klaus Hebborn, Councillor, Deutscher Städtetag / Landkreistag Nordrhein-Westfalen and representative of the Arbeitsgemeinschaft der Kommunalen Spitzenverbände NRW. The deputy chairpersons are Dr. Inna Goudz, Managing Director, Gemeinschaft der jüdischen Verbände und Gemeinden in Nordrhein-Westfalen, and Stefan Klett, Präsident Landessportbund Nordrhein-Westfalen e.V.
Further insights into the activities and fields of work of the Foundation House of History North Rhine-Westphalia can be found in the "Report 2020/2021", which you can download here.

The Behrens building — a historic location with an eventful history

The Behrens building, also known as Mannesmann House, was the venue of our anniversary exhibition “OUR STATE. 75 Years of North Rhine-Westphalia”. The building will be home to the new House of History North Rhine-Westphalia museum. The history of this location, with its eventful past and intimate connection to North Rhine-Westphalia’s history, goes back to 1910.
Designed by architect Peter Behrens, the building was intended to house the headquarters of the then Mannesmann steel pipe company. As early as 1912, the Behrens building, set prominently on the Düsseldorf bank of the River Rhine, was ready for occupancy. Today, the building is ranked as an icon in the history of administration architecture.

Tradition meets progress
In its day, the Behrens building was highly modern, combining tradition with progress. In its aspirations and external form, this office block was inspired by stately town residences informed by neo-Renaissance and neo-classical architecture. Apart from Peter Behrens, the other architects playing a role in the design included Walter Gropius, later the founder of Bauhaus and Mies van der Rohe.
At that time, this was one of Germany’s most modern office blocks. Thanks to its steel “skeleton frame” construction, it offered – then as now – considerable flexibility in the use of interior space. Since the offices were facing outwards, the Behrens building was among the best lit office blocks of its day. Subsequently, the initial Behrens building was expanded by two other buildings. To the east, the Väth Building, dating from 1937 to 1938, was designed by Hans Väth, Mannesmann’s Director of Construction. The neighbouring Mannesmann Tower, commissioned by Mannesmann AG from architects Egon Eiermann and Paul Schneider Esleben, was built between 1956 and 1958.

Renovation and conversion to the House of History North Rhine-Westphalia

We are looking for your NRW (hi)story

In search of our state’s history, the House of History North Rhine-Westphalia is coming direct to you with its mobile exhibition. The MuseumMobil invites you to rediscover the state and tell us your NRW (hi)story. The centrepiece of the exhibition is the MuseumMobil container which will visit all 53 districts and independent cities in the state over the next four years, stopping for ten to twelve days in each place.

MuseumMobil – an exhibition full of (hi)stories
53 selected items from all parts of the state tell stories that surprise, move and arouse memories – from the state’s founding to the present day. Interviews with contemporary witnesses bring history to life.

MuseumMobil – join in!
Come and talk to us! Tell us what you think constitutes North Rhine-Westphalia. Bring your personal items and stories along to the “Collection Saturdays“ and participate in building up the new museum’s collection. Discussions of topical subjects as well as offers aimed specifically at groups, schools and children complement the programme.

We look forward to your visit!